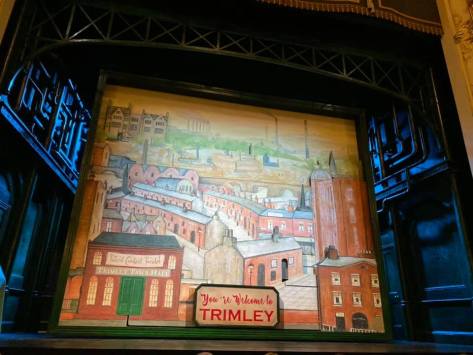 This is, as you’d expect, just a gloriously silly bit of fun. It’s been adapted for the stage, and given a few modern references here and there, but mostly left unchanged.

It actually starts rather slowly, and I thought could have used quite a bit of tightening in the first act. But hang in there – it really accelerates in pace …

Stephen Mangan is as excellent as you’d expect, Kara Tointon is perfect as Daphne and Johnston a brilliant Mrs Watson. The rest of the cast are all great too.

It’s a great mix of funny dialogue and slapstick in the best Ealing Comedy traditions. Oh, and with the bonus of a great dance routine in the bedroom!

The sets, too, are fantastic. Effective, and the design is genius.

Aside from the slow start, my only complaint was a modern reference that was hammered home. There was one line of dialogue that the whole audience got, but it was followed by a ‘in case you didn’t get it’ heavy-handed explanation. The other modern references were well done.

It runs into early January.