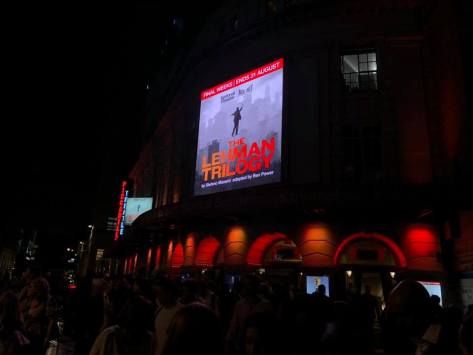 When I first got the email for this, it looked interesting but three hours seemed too long, so I hadn’t planned to book. But a friend, Miriam, talked me into it, and I’m so glad she did …

Let’s get my one complaint out of the way first: there is virtually nothing on the crash of the bank. We pretty much jump from 1929 to after the crash in 2008. That’s a great pity, as there’s obviously a fascinating story to be told in there.

However, I do understand why that decision was made. There’s 174 years of story to be told. The original version of the play was nine hours long in total, reduced to six hours for the version run in Italy and France. Three hours is really an absolute maximum for running it in one evening, and of all the parts of the Lehman story, the crash is the one we all know – so it did make sense to cut that and focus on what went before it.

That aside, it was an absolute joy. The writing is pure poetry, and the acting a delight. Each of the actors plays not just their own part at different ages, but a lot of other characters, and do it so well you feel there were more actors on stage. Godley in particular is fantastic at playing everything from a toddler to half a dozen female characters in fewer minutes, but all three were just astonishingly good. The real star of the show, though, is the writing.

The set is genius. It’s three sets in one, but back projection and clever lighting gives it the ability to be many places at many times, and I loved the way the cardboard boxes from the winding-up of the company become so many different props along the way.

Each act is almost an hour, but the time flies by. It’s a fascinating and educational tale, funny and dramatic, and hugely entertaining throughout. It got a very well-deserved standing ovation.