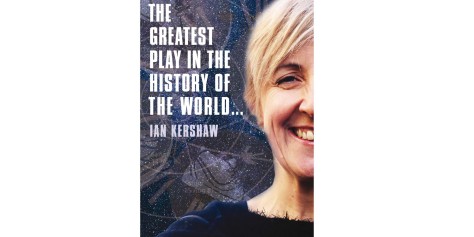 The Trafalgar Studio 2 is an intimate theatre at any time. It seats 100, and is usually not full (though it was tonight). In one of the front-row bench seats, you have your feet on the non-raised stage. The sense of intimacy was heightened by Julie Hesmondhalgh greeting us with a mug of tea in her hand, and chatting with us before the performance like we’d come round to her place for tea …

It’s a one-woman play, written by her husband, Ian Kershaw. There’s a clever gimmick I won’t spoil (but is given away by any stage photos you see, so I recommend not Googling if you don’t want to see), and the scene flicks between an ordinary street in Preston and a narrative, also recorded by Hesmondhalgh, about the Golden Record on board the Voyager spacecraft.

The Voyager thing is another gimmick. As a space geek, and someone who loves the ‘pale blue dot’ photo, I appreciated it. Non-space geeks might find it a little overdone.

But it’s a beautifully-told, surreal story about which I’ll say nothing. Hesmondhalgh brings all the invisible characters to life in the way that only a fine actor can, such that you can picture them there on stage with her.

It’s a delightful, 70-minute one-act play. Romantic. Sentimental, yes, but definitely within acceptable limits. Go see it – a bargain at £35 for front-row seats.