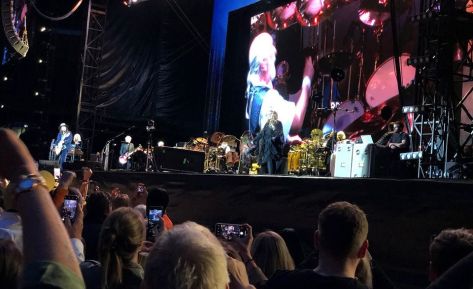 I don’t normally go for big gigs, but felt this one had to be done. Took a deep breath before paying £200 for a ticket six rows from the stage, but it was worth every penny …

All three original members of the band – Mick Fleetwood, John McVie and Stevie Nicks (who counts …) – are in their 70s now, but you mostly wouldn’t know it. Stevie can’t hit the high notes any more, so the songs have new arrangements to accommodate that, but they work really well. Mick Fleetwood has the energy of a kid, at one point doing the world’s longest drum solo and, amazingly, keeping the audience the whole way through it (I’m normally bored with drum solos within 30 seconds). He was also really engaged with the audience.

Neil Finn makes for a very convincing Lindsey Buckingham stand-in on both guitar and vocals, and got the whole audience doing the mobile flashlight thing as he and Stevie sang Finn’s Don’t Dream It’s Over (video clip below). On the topic of Buckingham, whatever happened in the past, Mick gave him a generous shout-out.

It was theoretically a seated concert, and it was while the Pretenders were on as support act (they were also still good, but I was never really a fan – it was a pleasant enough warm-up). But the instant Fleetwood Mac walked on stage, everyone rose to their feet and stayed there the whole show.

There was every age there, from people old enough to have seen their early concerts to people who wouldn’t even have been born then. I was absolutely amazed by all the 20-somethings – wouldn’t have thought it was a remotely cool band to them, but seems I was wrong. Absolutely everyone was bopping and singing along like teenagers, even me.

The main big screen on the stage showed some lovely intercuts of the live performance, past performances and atmospheric images. I read complaints on Twitter about the sound quality in the more distant parts of the stadium, but up close it was great. Had earplugs in for the Pretenders (just to reduce the volume a bit) and took them out for Fleetwood Mac.

Always a risk to see your heroes live so late in their career, but this one paid off big-time! If you get the chance to see them, go.